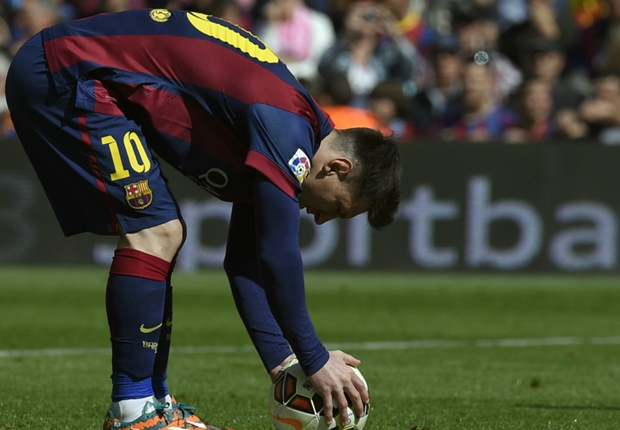 The Italian, who recently joined Barcelona’s technical committee, has acknowledged the prolific attacker could be on his way out if a club matches his buy-out clause

Barcelonadirector Ariedo Braida has admitted that Lionel Messicould leave the Catalans if a club like Paris Saint-Germain or Manchester City decides to meet the Argentine’s buy-out clause.
The 27-year-old has a contract with Barcelona until June 2018, but has a limited fee release clause of €250 million.
“I think that it is nearly impossible that Messi leaves Barcelona, but it could happen with clubs like PSG and Manchester City around, who have a lot of money to spend,” Braida toldEsport 3.
“Strange things happen every now and then…
“Messi is not simply a footballer. He is a phenomenon, an extra-terrestrial. He is up there with Pele and Diego Maradona.
“He has incredible speed and takes aim at goal in an impressive way.”
Braida left his position as general director at Milan in January 2014 after 28 years at the club and recently joined a new technical committee at Barca to help oversee planning for the first team.
The 68-year-old claims he came close to poaching the four-time Ballon d’Or winner during his time at San Siro, though, before hailing him as a true phenomenon.
“Did I try to sign Messi for Milan in the past? I got a call from someone when he was still a little kid and tried to sign him.
“I have 30 years’ worth of contacts and know a lot of people around the world.”
Messi made his official first-team debut at Barcelona in 2004-05 and has since developed into one of the best players in the history of the game.
The Argentina international is Barcelona’s all-time leading goalscorer as well as in La Liga and Champions League.