MUSIC: VivaEdiee – Down On Me 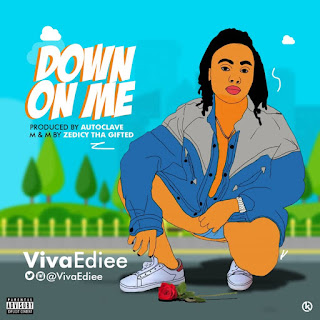 Nigerian upcoming female artiste “VivaEdiee” has released her first single of d year 2018, interviewing her on why it took her so long to drop another track after her last track of the year 2017 which went far & made her famous where she cried & called out the name of a young man in the single called Chinedu (which many assumed must have been her boyfriend or ex) who promised to change her zobo to Pepsi,buy her mansion for Lekki,fight for her like a Jetli forever remain her bestie but all ended as Jege,she said ‘after my last single in December 2017,I became too engaged with academic work which all the stress ended in May,2018 so to make the best out of it too I suspended music for a while but now i’m done with academics (at least for now) & music owns me so to all my fans, friends, family,loved ones that have been asking for more hits expect d best from “VivaEdiee” (we go blow this year), thanks for all ur support & love,I love u all.

“VivaEdiee” is saying this is not gonna be d best but “Down on Me” is good,she did her best,in this track she promised never to disappoint us her true fans & that she is gonna be there for us from Monday to Sunday when d sun shines, Download “DOWN ON ME” by “VivaEdiee” below & have fun

Our customer support team is here to answer your questions. Ask us anything!

RavePulse NG
Main Support
Available
Hi, how can I help?
Scroll to Top